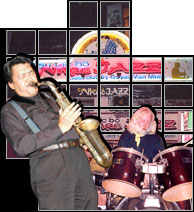 After giving a performance at the Association of Vietnamese Composers at 51 Trần Hưng Đạo street, Hanoi in 1988 where he introduced different types of saxophones, Quyền Văn Minh was invited to the Ha Noi Conservatory of Music where he began to work as a saxophone instructor. He then began to sign contracts for playing jazz at large hotels and bars for foreigners. Until October 1997 the idea of opening a jazz club was always a continuous urge within him, especially after he made various trips to France and Germany in 1996 and received the title, Excellent Artist in February 1997.

From 1988 until now Minh has been training a large number of students and co-operating with several other artists to perform jazz regularly. From these people, a sufficient number of qualified performers were chosen to form the Red River Jazz Band. In October 1997 Vietnam’s first Jazz Club officially began its activities at the Giảng Võ Exhibition Centre, giving performances every night with the intent of increasing the skills of jazzmen as well as the awareness of and interest in Jazz among Hanoians. Due to the owner’s inexperience in contractual terms, however, the club had to be suspended in the end of December 1997 when the rented area was withdrawn for construction purposes.

Undaunted, Minh went on to co-operate with the Vietnam-Japan Association for Cultural Exchanges to renew the club at 16 Lê Thái Tổ street. This, too, survived only 8 months (from October 1998 to June 1999) when it had to leave the site for the same reason. Minh then decided to sub-rent the premises of Thang Long Theatre at 31 Lương Văn Can Street where the Jazz Club was settled on 23 October 1999 and continues its activities until now. 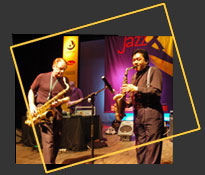 Having experienced a great deal of financial and resource difficulties, the latter being several member artists changing to other musical types due to the many hardships and low incomes, the club has now been operating for 10 years (as of 2007) and is booming with a team of 16 young artists aged from 18 to 24. The club has been extensively participated in two European Jazz Festivals held in Hanoi and other important events together with jazz artists from different countries including the USA, Germany, France, Australia, Norway, Japan, the Netherlands, Singapore, the Czech republic, Poland, Switzerland, among others. Notably, the Red River Band made some 10-day tours to Singapore in 2001 and Hong Kong in 2002 and took part in the International Jazz Festival held in Macao in September 2002. The band also performs to a number of international organisations in Hanoi and overseas. Performances are given at the club nightly including holidays.