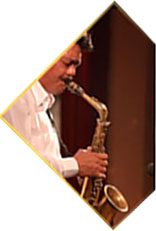 With the permission from the Department for Wind Instruments under the Ha Noi Conservatory of Music in 1989, the saxophone began to be introduced as a major and I became the first saxophone instructor at the prestigious school.

Beside my regular responsibilities in the Ensemble and the teaching activities, I intensively prepared for a new solo performance that took place in October 1989 at the Music Club under the Association of Vietnam’s Composers at 51 Trần Hưng Đạo Street.

The program was broadcasted by the Vietnam’s National Television with the introduction by Composer Đam Linh, the video tape being available.

During this time I also continued to participate in all activities of the Thang Long Art Ensemble and the school as well as other performances together with both professional and amateur artists, for my goal is to accumulate actual experience and improve my skills through the usual, day-to-day work, thus increasing my professional background and better fulfilling my tasks as an instructor. 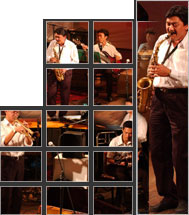 In 1991 the Department of Culture and Information allowed me to be fully transferred to the Conservatory of Music, taking into account the overlapping of my performing and teaching activities that may have negative affects to the overall operations of both entities.

The teaching activities alone have always kept me busy, for a large number of foreign officers and their children would want to practice the saxophone. Through the Service of Diplomatic Services I have been instructing more than 30 foreign students from the UK, France, the USA, Germany, Sweden, Indonesia, Canada, Japan, Finland, and Nepal. This adds inspiration to my teaching activities and my pride at being a Vietnamese who can show to the foreigners the beauty and quintessence of the saxophones.

I also built a saxophone performance for two foreign students and a Vietnamese as part of the program, ‘Small flowers’ that goes on Vietnam’s National Television.

The preparations for the solo performances and the teaching activities at the Conservatory of Music helped me in organising the first-ever Hanoi’s jazz band in Hanoi to perform at the French Culture Day in Vietnam on 21 June 1992 as requested by the Conservatory and the French Embassy to Vietnam.

During this time I also built a saxophone quartet at the Thang Long Art Ensemble together with other artists from the Vietnam’s Broadcasting Station.

Later, I joined the Phuong Dong band in a tour to Moscow, the capital of the then Soviet Union, on occasion of Vietnam’s National Day. We also took part in the National Festival of Light Music Bands held in Da Nang and won the first prize.

With the support from the Ministry of Culture and Information and the Ha Noi Conservatory of Music and the financial aid from the Swedish Fund for Cultural Development, I was able to organise the 3rd saxophone solo performance at the City’s Grand Theatre. The greatest thing I wanted to do in the program was to experiment mixing folk melodies with jazz and to compose new compositions for the saxophones using traditional Vietnamese themes.

On the other hand, I experimented playing solo the Baritone saxophone in efforts to further extend the functionalities of different types of saxophones.

The program was broadcasted by the Vietnam’s National Television, the video tapes being available.

More than 20 years of my unfatigued efforts, an unexhaustible love for my profession, and the precious assistance I have always been receiving from my fellow instructors have resulted in my success in creating a performing style of my own and introducing the saxophone as a major at the Conservatory of Music. This also led to the title of Excellent Artist that I have been granted at request of the Conservatory and the Department of Wind Instruments.

This is such a great award to my artistic life, one that gives me the infinite inspiration in continuously improving both my performing and instructing abilities for the sake of younger generations. (The follows are several articles and images showing different events in my artistic and teaching life).