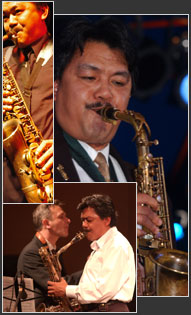 I'm now giving performances, training myself intensively to improve my skills, collecting materials, and instructing my private saxophone-loving students.In 1970 I took part in the Viet Bac Military Region Arts Ensemble as an apprentice clarinet player. Together, we toured along different provinces of the Viet Bac Autonomous Area.

In 1971 I joined the Ha Tay Province Art Ensemble, where I managed to change from an orchestra musician to an on-stage accompanist who gained everybody’s confidence in the numerous tours throughout the Northern provinces and cities. Together with the composer Nguyen Huu and the poet Be Kien Quoc, we guided different groups of composers that were sent by the central authorities to the rice-growing areas and wounded soldiers’ camps in Ha Tay Province as part of the program on producing song albums for by the (former) Ha Tay Province Service of Culture.

In 1975 I was transferred to the Department for Propaganda and Training under the Sport and Gymnastics College where I was responsible to organise art performance activities for the training staff and students. During this period I also helped different factories, companies, etc. who participated in amateur art performing activities of Hanoians and took part in the Youth Club orchestra under the direction of instructors and composers such as Vu Nhat Thang and Trinh Kinh. Together with the Youth Club orchestra and amateur singers such as Huy Tuc, Van Sau, Tuyet Minh, among others, I made various tours to different places such as the Lam Đong new economy zone, the Da Lat High Rank Military College, and the HCM City Youth Centre.

In 1980 I was invited by the Golden Bell Troupe to build the light music group and join their performances in Hanoi and other Northern Provinces. Also in this period I start instructing Tran Manh Tuan who appeared as an excellent saxophonist at the National Festival of light music bands held in Da Nang in 1993.

In 1981 I transferred to the Hanoi Art Ensemble as requested by the Hanoi Department of Culture and Information and joined the ensemble in the many tours all over the country as well as abroad, gradually becoming a key orchestral musician and on-stage accompanist. On the other hand, I took part in other performances with renowned singers as a source of income.

In the period from 1983 until now I have been instructing a large number of students, both my own and those from different troupes, provinces, the Ministry of Internal Affairs, the National Army, etc.

In 1986 I toured Vientiane, Laos with the Hanoi Art Ensemble as a member of the light music group.

In 1987 together with the Hanoi Art Ensemble I made a trip to Berlin, the capital of the then German Democratic Republic, where I played as a clarinettist in the national music group at a performance on occasion of the 750th anniversary of the Berlin City. Also in 1987 I had the honour to give a solo performance with two classical pieces for the alto saxophone, including The Indian Guest by Rimsky Korsakov and The Shepherd by Claude Debussy. In this year I also joined the wind instrument group of the national symphonic orchestra at the performance reporting the achievements of the composer Đo Hong Quan at the city grand theatre. Continuously, I spent a great deal of time taking part in the music recording of different plays, movies, and songs for professional and amateur singers. 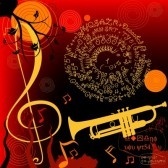 In 1988 I joined the Hanoi Art Ensemble in the national festival of professional ensembles held in the city of Da Nang. Together with the ensemble I toured Phnom Penh, Cambodia. On 25 September 1988 I gave a solo performance featuring three types of saxophones, including:

The performance was broadcasted by the Vietnam’s National Television with the introduction by Composer Ho Quang Binh, the videotape being available.